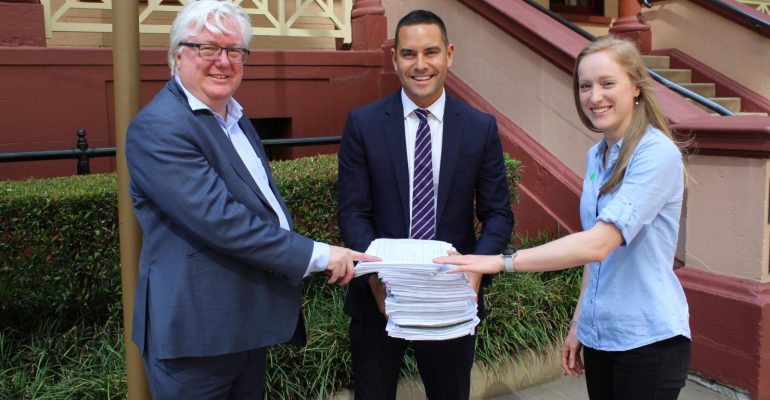 Vinnies NSW has today delivered its social housing petition to Alex Greenwich, MP to be tabled in NSW Parliament ahead of the State Budget next month.

The Build Homes, Build Hope petition was launched in September last year, calling on the NSW Government to build at least an additional 5,000 social housing properties each year for the next decade to meet the needs of the current social housing waitlist.

More than 51,000 applicants are currently on the social housing waitlist in NSW. Some have been on the list for more than 10 years despite being approved.

After a committed campaign led by Vinnies members and volunteers, the petition containing 10,000 signatures was delivered to Alex Greenwich, Member for Sydney, outside of NSW Parliament House today.

“The NSW Government has the opportunity to make a difference to the lives of thousands of people by providing the safety, security and stability of a place to call home,” said Jack de Groot, Vinnies NSW CEO.

‘Right now there are many people facing uncertain futures due to the pandemic and the Federal Government’s decision to wind back JobSeeker without a long-term solution in place.

“Having a home is the foundation from which people are able to plan beyond one day at a time. Without a secure place to live, it is incredibly difficult for people to live healthy lives in the present, let alone plan for the future.”

Organisations including Homelessness NSW, NCOSS, Mission Australia and Uniting, as well as a growing number of industry bodies and economists, agree that building more social housing is urgently needed to support the most vulnerable and boost jobs in the residential construction sector.

Alex Greenwich, MP urged the NSW Government to take action on the petition as a means of providing housing to people on low incomes and helping the economy bounce back from impact of COVID-19.

“The Government proved it was possible to take meaningful action on homelessness during the pandemic. The Build Homes, Build Hope petition shows there is community support for more action to be taken on this issue,” said Mr Greenwich.

“Vinnies members and volunteers live and work in communities throughout NSW. They understand the needs of people who are struggling to get by and know that having a place to live is one way we can make a meaningful difference to improve lives.”

Brooke Simmons, Vinnies NSW Vice President Social Justice, thanked Vinnies members and volunteers for taking the lead on the Build Homes, Build Hope petition by meeting with members of the community and MPs.

“I want to thank everyone who has supported the Build Homes, Build Hope petition over the past year,” said Ms Simmons. “When we launched the petition in September last year, we knew it was an ambitious target, but one that was essential to ensuring everyone was able to live with the safety and security of a place to call home.

“Our members and volunteers have taken the time to meet with people in their communities and urge their local MPs to support the campaign. Vinnies is so grateful for their efforts in making today a reality.”